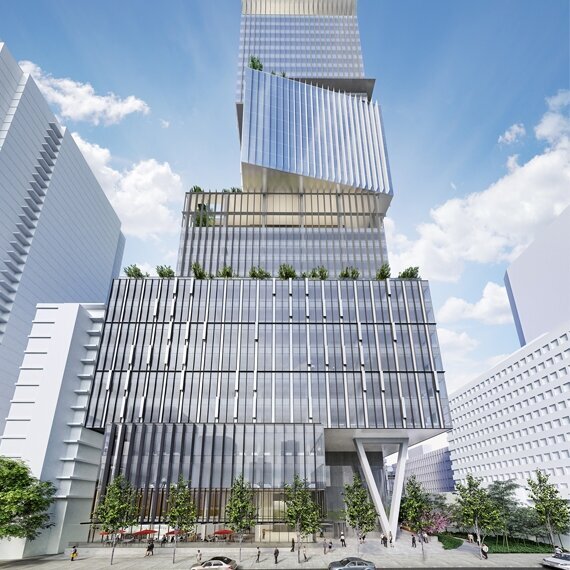 There is an unprecedented number of class-A office towers coming to Downtown Vancouver. The designs are fantastic overall, and notably more interesting than a lot of the tower architecture we have seen so far in Vancouver. We are pleased to compile a list of these towers, and can’t wait for them all to rise up and complete! Below are photos and short profiles of many of these towers.

Confirmed anchor tenants include Erns & Young (E&Y) taking up 60,000-sq-ft, law firm Blakes taking up 80,000-sq-ft, and law firm DLA Piper taking up 67,000-sq-ft within the top two boxes of the building. All three companies already have a major presence in downtown Vancouver: E&Y has an existing office at TD Tower, Blakes is at Three Bentall Centre, and DLA Piper is at Park Place. 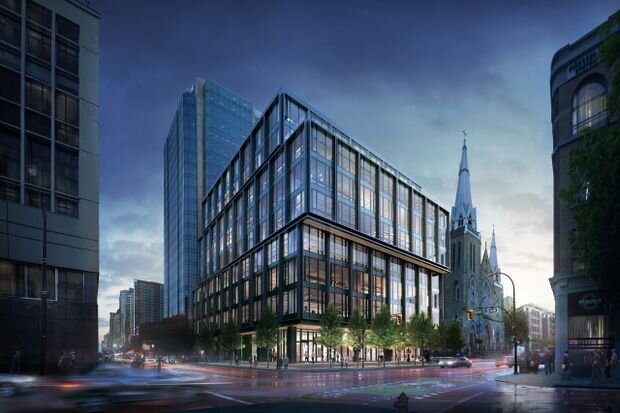 The new nine-storey building will create 152,000 sq. ft. of additional office space with a layout oriented for tech firms. Amazon will be the main tenant. 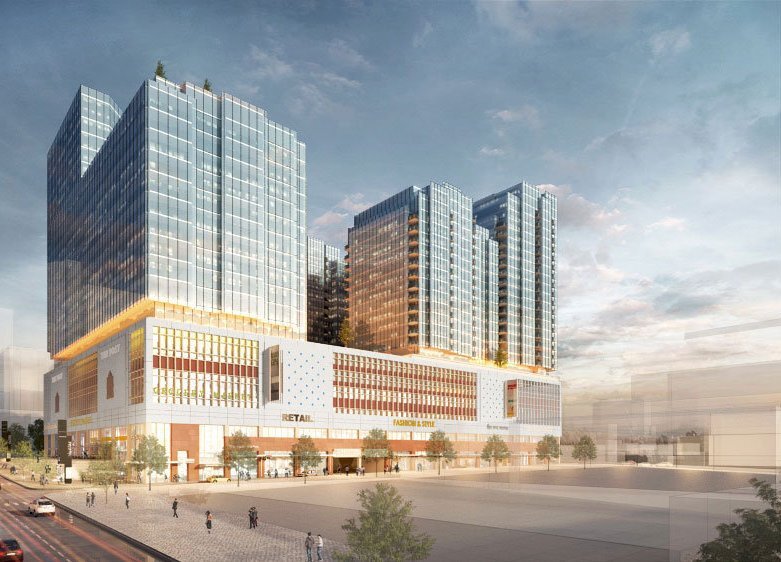 Two new office towers to be partially occupied by Amazon are part of the development. The towers will be constructed to a LEED Gold standard and will contain 1.13 million square feet of office space.

A 200,000 sq. ft. retail podium is also part of the development and it’s not unreasonable to expect the space to occupied by Amazon-owned retailers such as Whole Foods, Amazon Go, or Amazon Books. 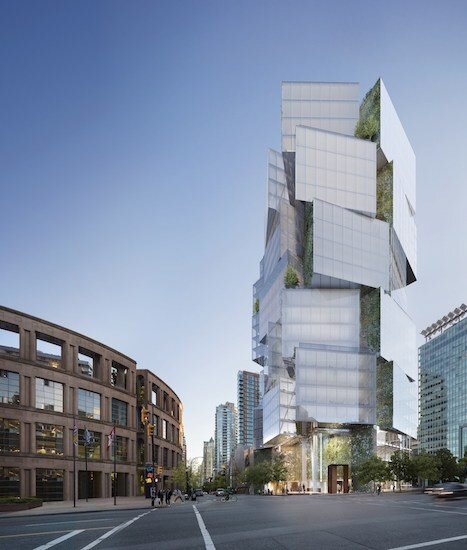 Designed by Tokyo-based OSO and Vancouver-based Merrick Architecture, and developed by Westbank, the tower’s form is composed of a system of four-storey cubes stacked around a central concrete core, which contains the elevator shafts and emergency staircase. Apple and Deloitte will be the primary tenants. 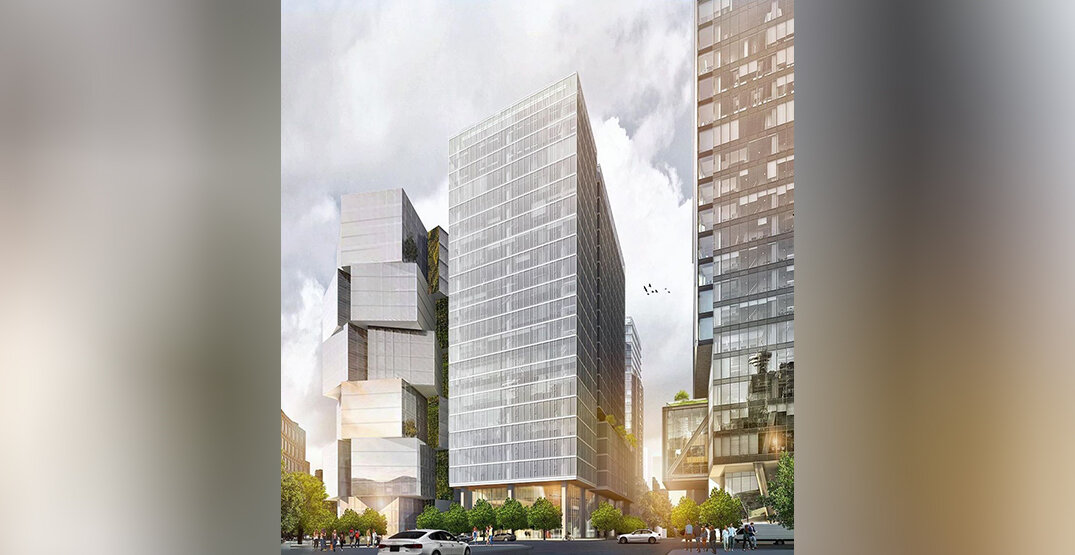 Based on the artistic renderings, this project carries a more conventional building design compared to its neighbours; its simplicity provides contrast with the geometrical complexity of the stacked cubes of 400 West Georgia Street. The regular-shaped floor plates on the lot also serve to maximize the property’s buildable floor area. 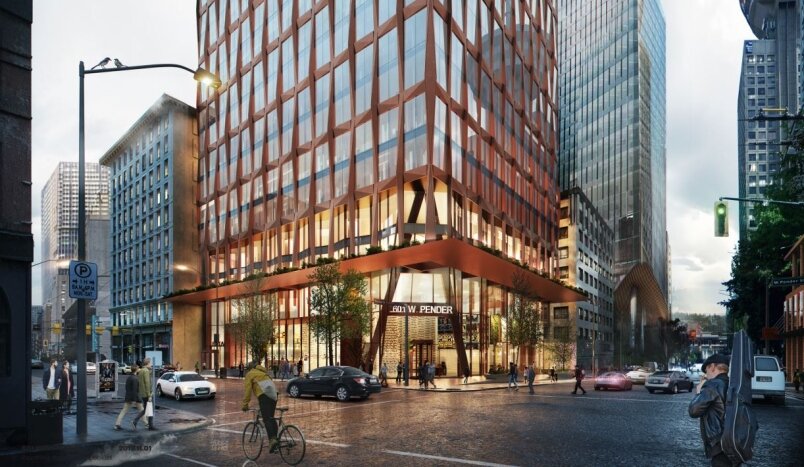 A rezoning application has been submitted by local developer Reliance Properties to turn the property at 601 West Pender Street into a 338-ft-tall, 29-storey office tower. While a building height of up to 450 ft is permitted by the site’s zoning, the actual buildable height is significantly curbed by a view cone from the Cambie Street Bridge. 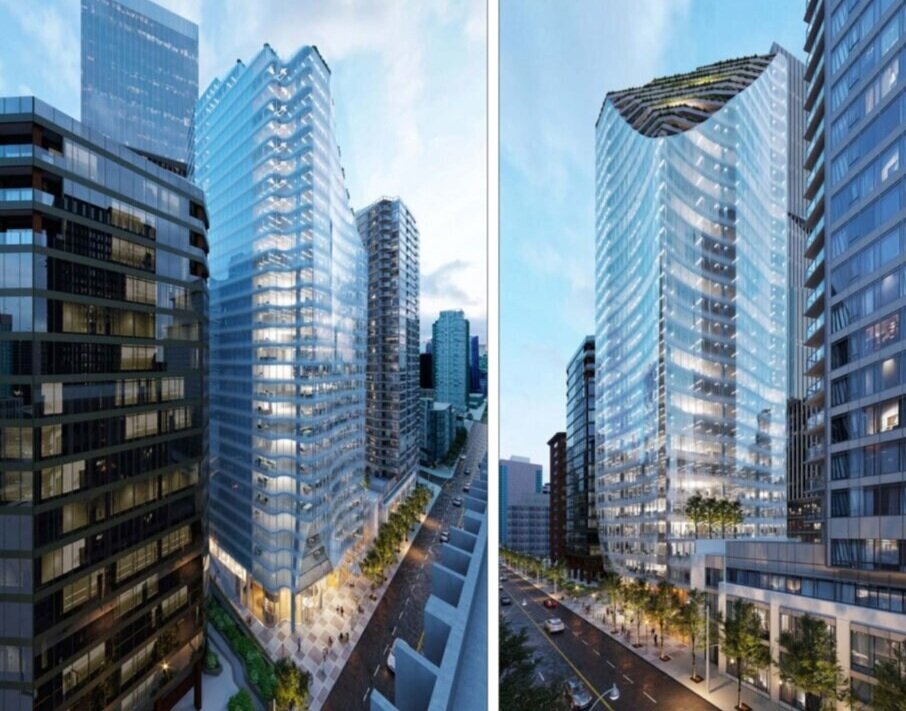 The entire top level is dedicated as 8,900 sq. ft. of indoor amenity space for the building’s tenants. The ground level also includes 5,700 sq. ft. of commercial space that is intended as a restaurant. 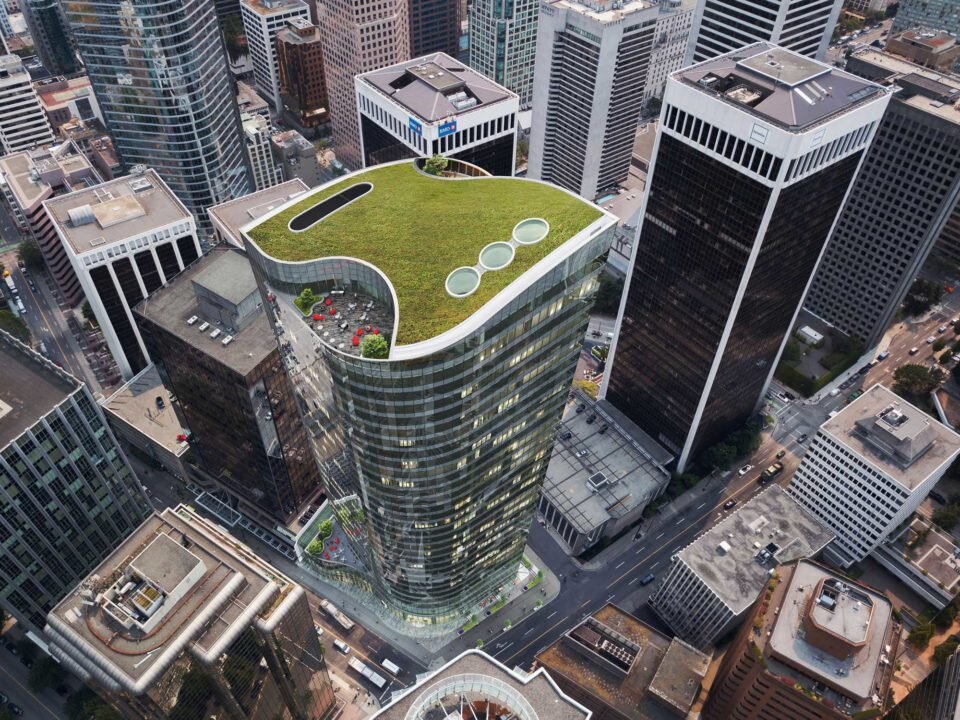 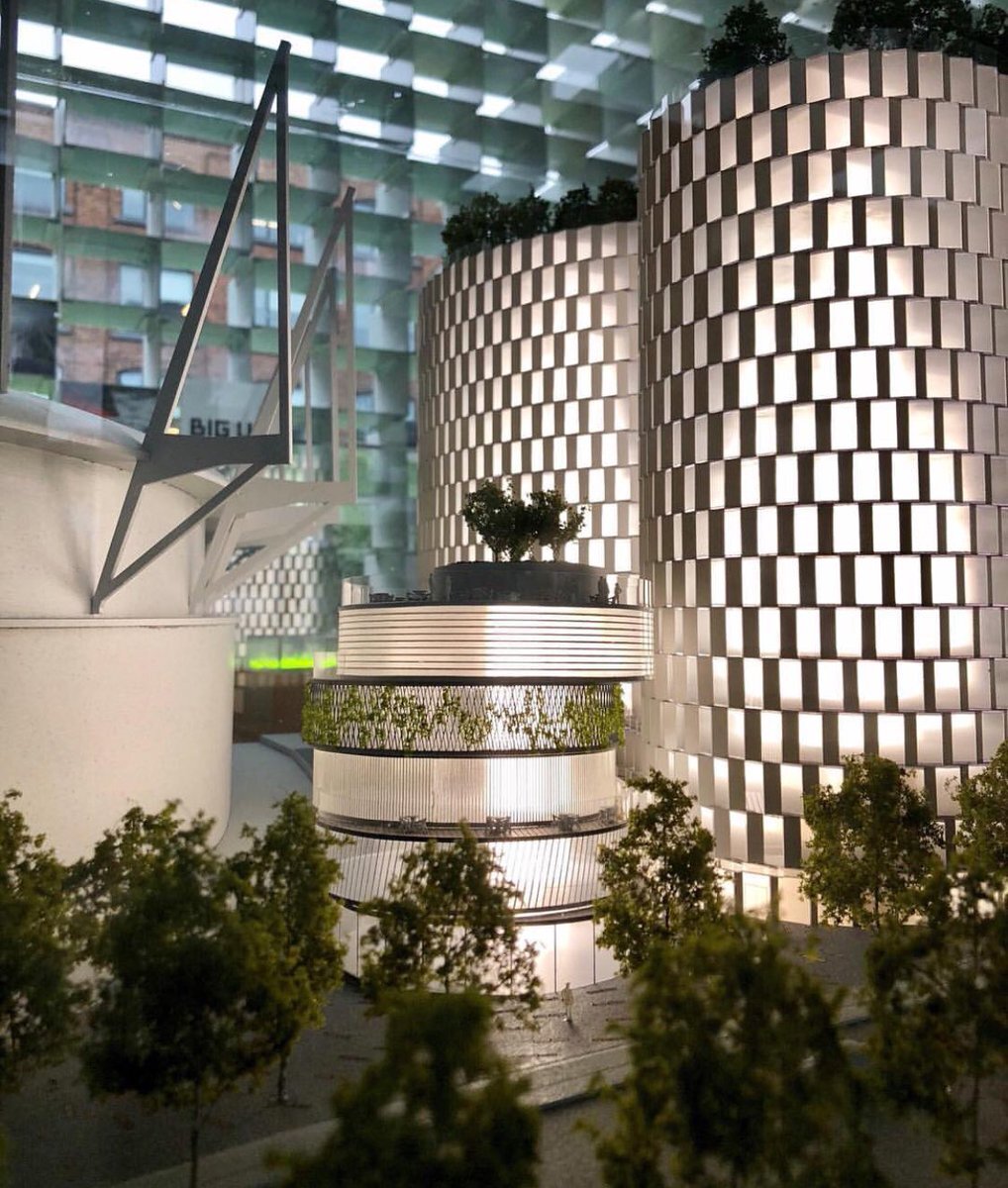 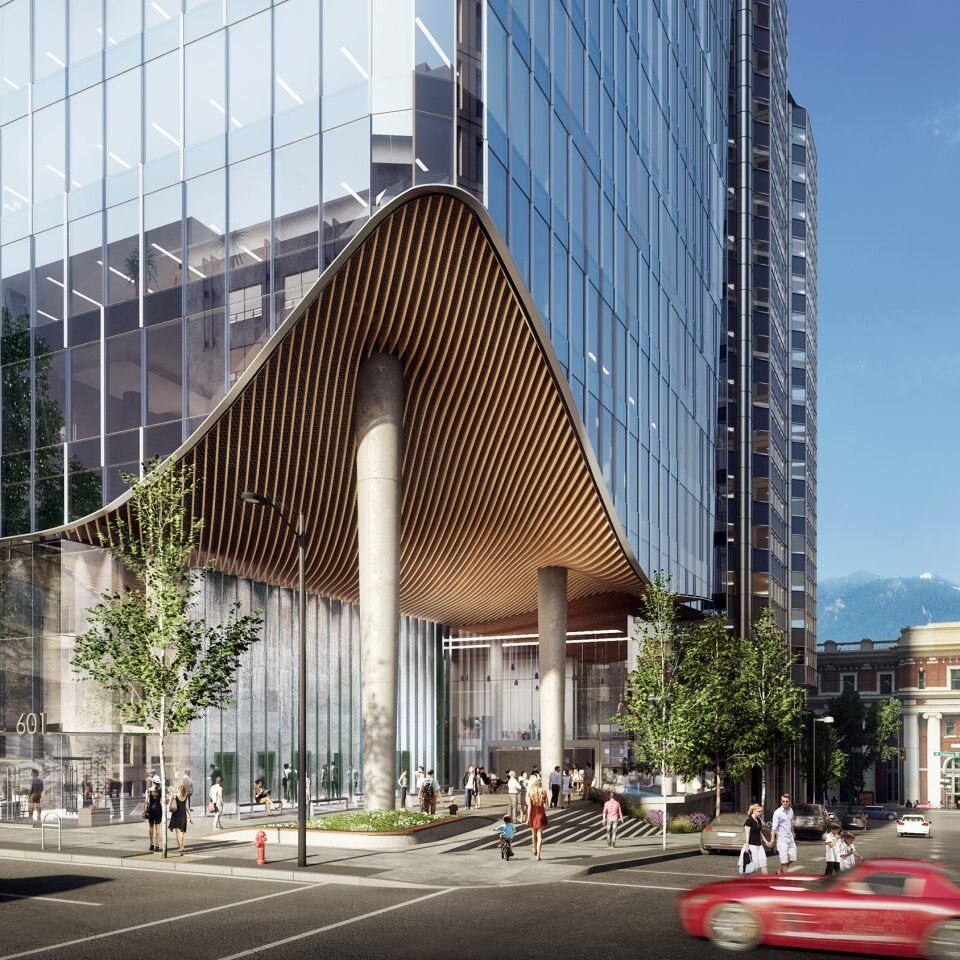 Located on the prominent corner of West Hastings and Seymour Street, 601 West Hastings will be one of downtown Vancouver’s most striking commercial developments. Responding to the growing needs of the city, this tower was redesigned with a revitalized community plaza and 25 stories of modern office space. 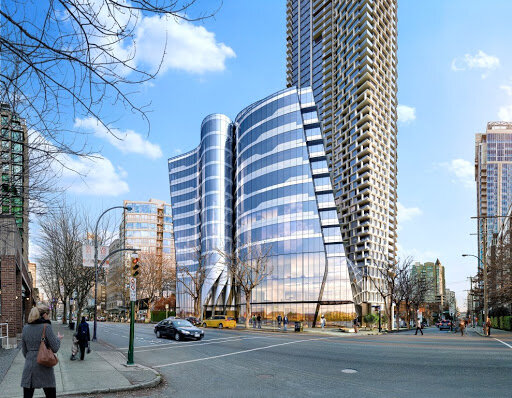 The Offices at Burrard Place is a 13 storey ‘AAA‘ office tower comprising of over 140,000 square feet — including an incredible array of world-class amenities. 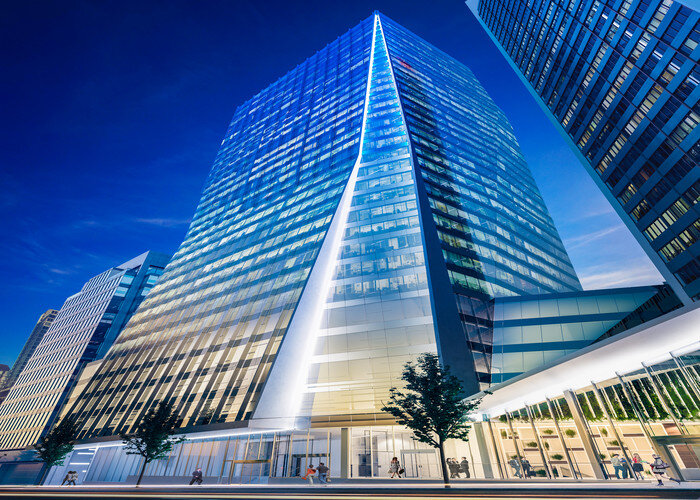 Rising 33 storeys above West Georgia and Seymour Streets, Vancouver Centre II is the next phase of the Vancouver Centre Complex, located at 733 Seymour Street developed by GWL Realty Advisors.  This amenity-rich, thoughtfully designed and LEED® Platinum planned office building is poised to become an iconic development in the new core of the city’s Central Business District. 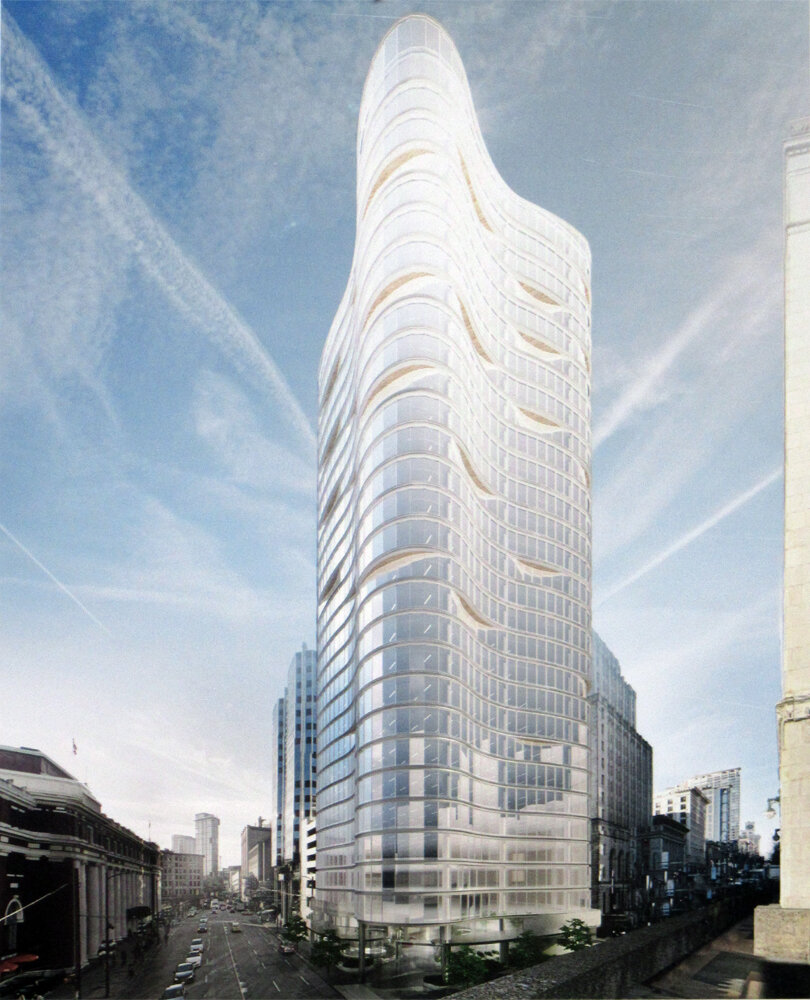 Designed by renowned architecture firm Kohn Pedersen Fox, this property will be a stunning addition to the Vancouver skyline. The setting, adjacent to Waterfront Station offers exceptional access to public transit, bike lanes, premium retail and restaurants together with stunning views. 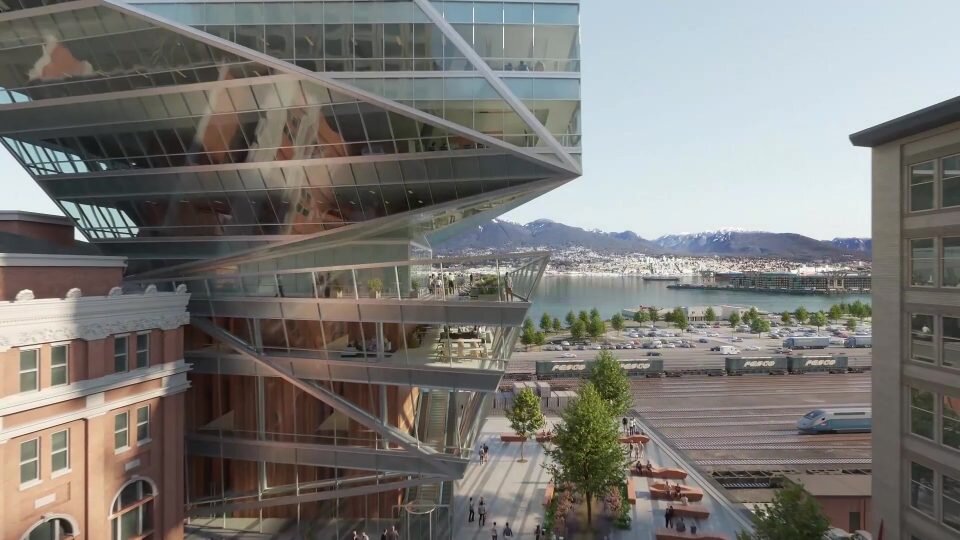 Cadillac Fairview is planning a landmark 26-storey office tower next to Waterfront Station, known as The Crystal at Waterfront Square.

The office tower at 555 West Cordova has been in the works for years, and a previous design was rejected by the Urban Design Panel in 2015 due to concerns about how the proposed building interacted with the historic Waterfront Station, as well as the loss of public views and space.

Now, a revised development application has been filed with a slightly tweaked design. Cadillac Fairview says the reconfiguration allows for 85 percent of the current surface parking lot to be repurposed as an open civic square, hence the name “The Crystal at Waterfront Square.” There will also be a publicly-accessible viewing terrace on level four, with water views to the North Shore. 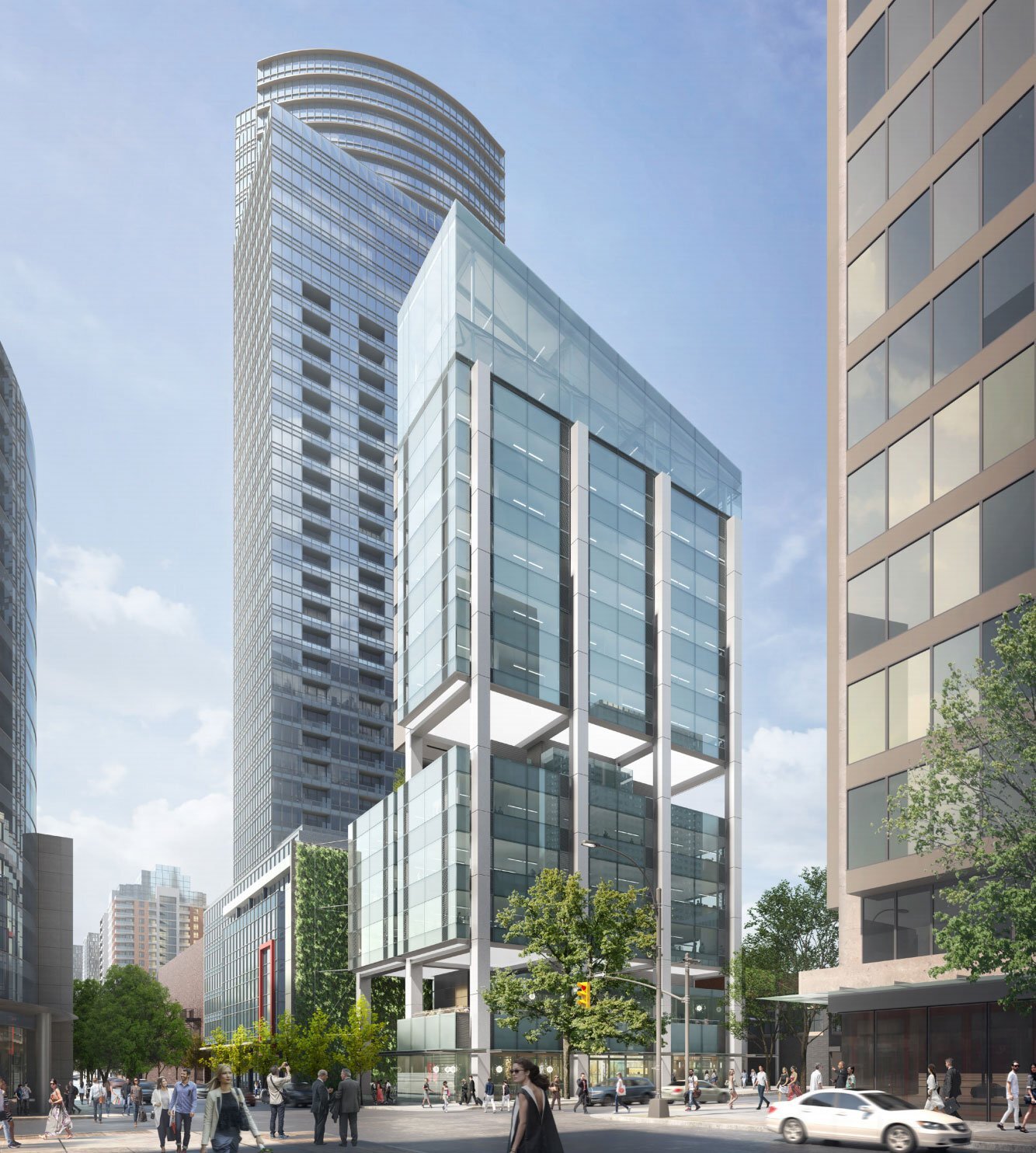 The corner of Robson and Seymour will soon be transformed with the addition of a 13-storey office and commercial building. 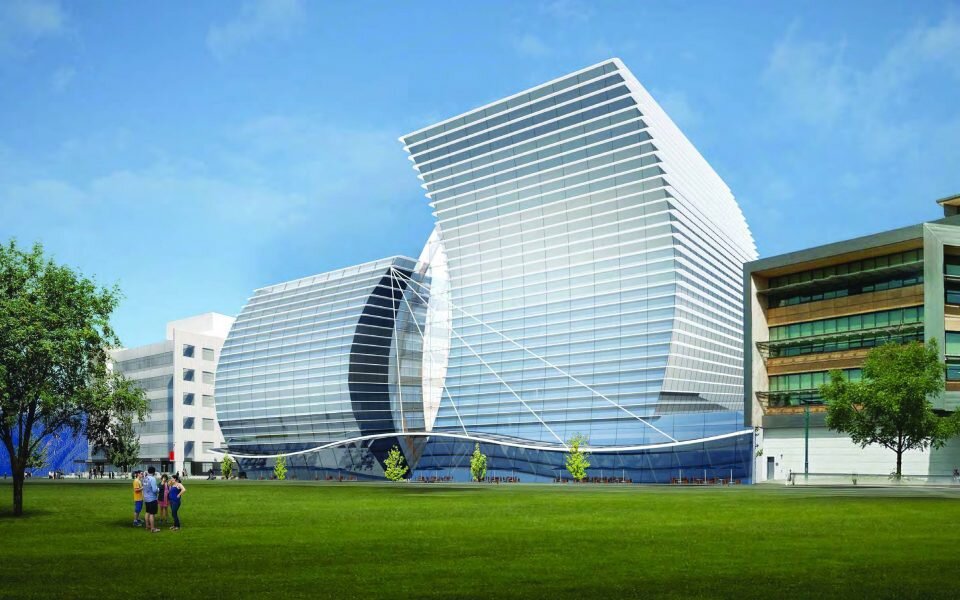 The site is adjacent to the former MEC head office building on Great Northern Way — a building that the outdoor equipment retailer hopes to sublease as it restructures.

The concept for the development includes two towers, seven and 11 storeys, with approximately 344,000 sq ft. of office space. The towers are connected by a large glazed atrium with extensive use of wood, possibly cross-laminated timber 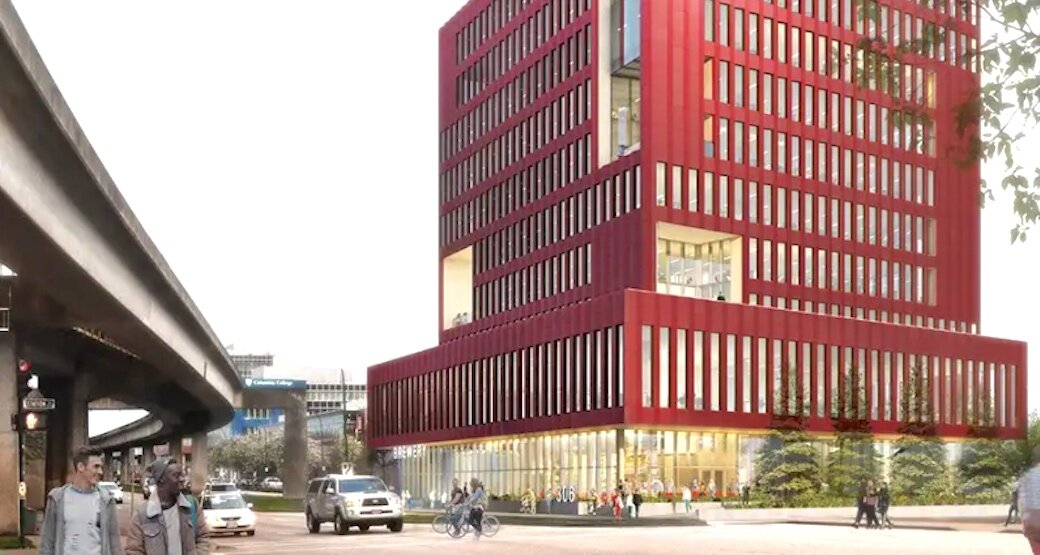 Local developer Rize Alliance has submitted a development application to the City of Vancouver to turn the site at 306 Terminal Avenue — currently occupied by a Tim Hortons restaurant building and a vacant parcel — into a 148-ft-tall, 10-storey, mixed-use commercial building. 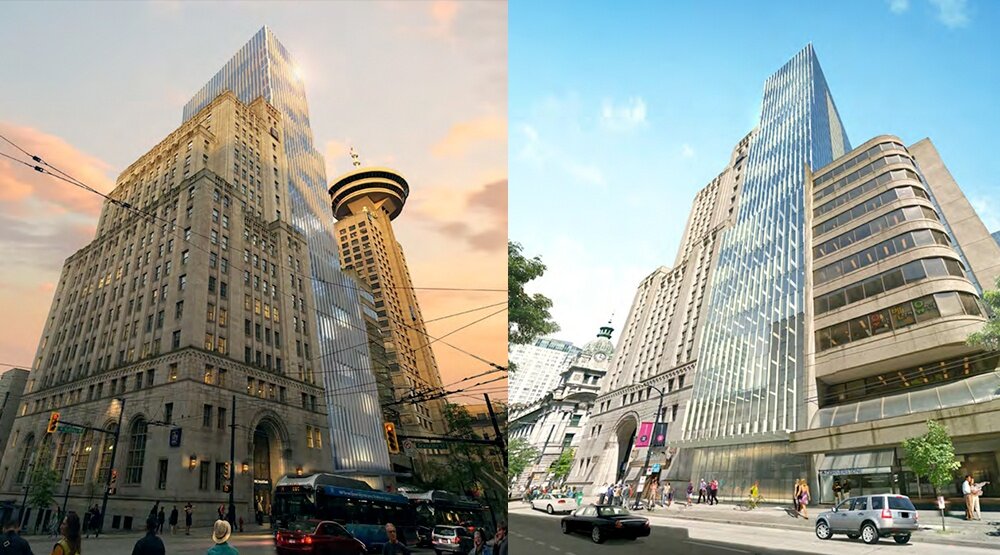 This unique project, designed by Musson Cattell Mackey Partnership, squeezes in a 330-ft-tall, 28-storey office tower into a 6,242-sq-ft, ground-level parking lot site with a narrow street front of only 120 ft. A total of 158,387 sq. ft. of floor area will be created, with office floor plates ranging from about 6,100 sq. ft. at the base to 5,400 sq. ft. in the upper levels. This creates a floor space ratio density of 25.5 times the size of the lot. 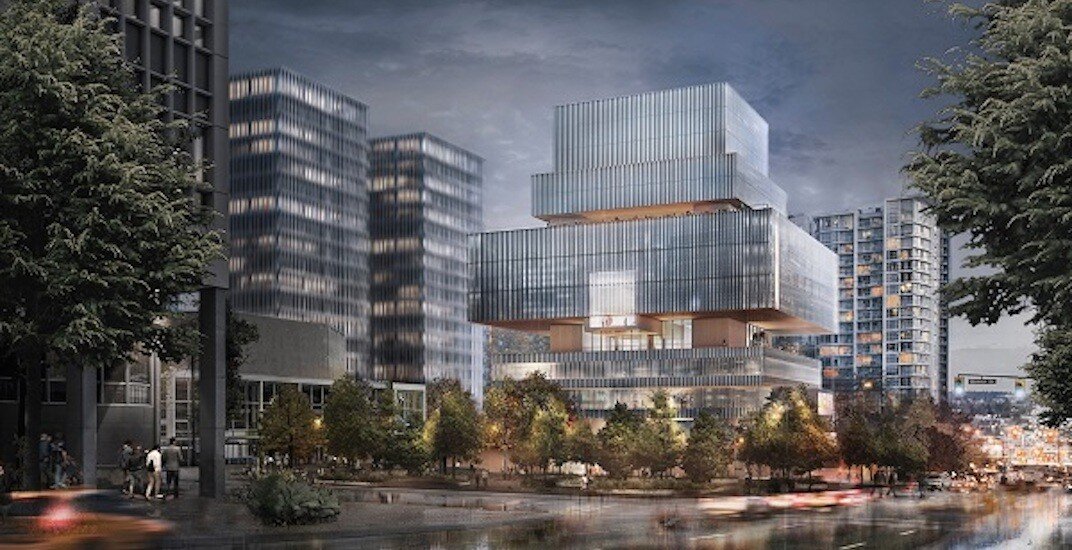 A new private donation of $1.5 million has been made to the Vancouver Art Gallery (VAG) towards the construction of its new purpose-built building. When complete, the new VAG will have a total floor area of 300,000 sq. ft., built to a Passive House green building standard. It will create 80,000 sq. ft. of exhibition space, more than the current exhibition capacity of the existing facility within the old courthouse, as well as two free-access galleries, a 300+ seat theatre, four classrooms, library and archives, gallery store and restaurant, and state-of-the-art museum facilities for art storage and preparation. 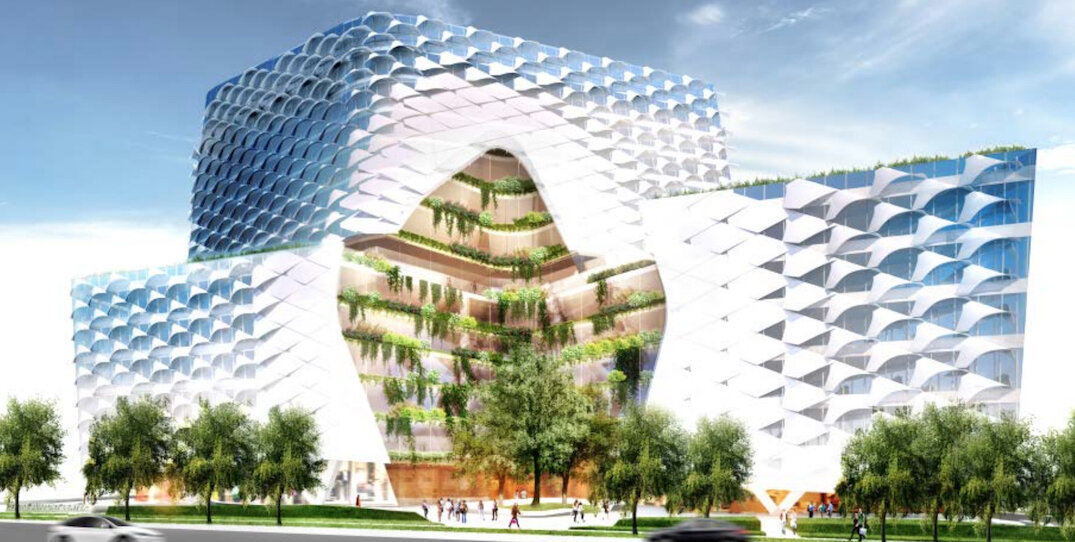 lululemon will have a new purpose-built, world-class headquarters office building in Vancouver, following city council’s decision to unanimously approve its proposal for a new home in the False Creek Flats. With the approval of the rezoning of the 2.8-acre site at 1980 Foley Street, construction on the new 214-ft-tall, 13-storey building with a total floor area of 593,400 sq. ft. is slated to begin in September 2020. 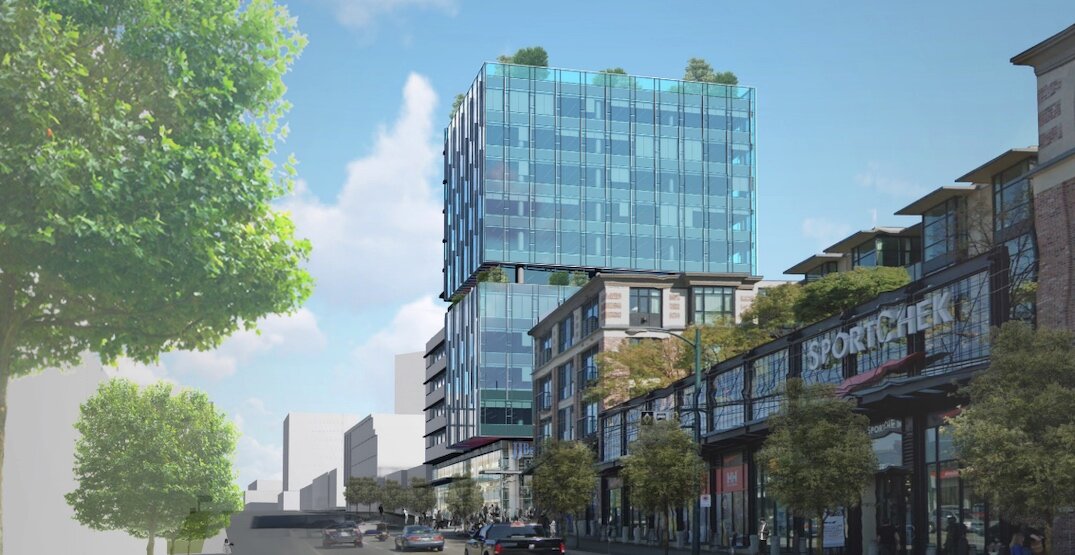 If approved, a proposed office tower at the southeast corner of East Broadway and Ontario Street would become one of the largest office development projects along the Central Broadway Corridor in years. 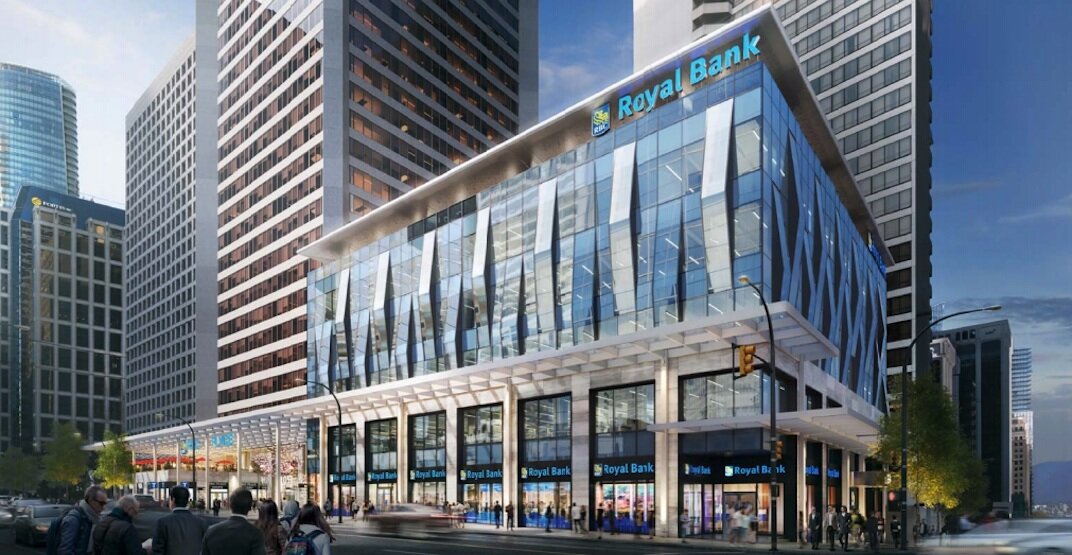 The City of Vancouver has received a development application from Royal Centre Inc. that calls for significant alterations and a reconstruction of the existing bank building, located at 1025-1055 West Georgia Street — the highly-prominent northwest corner of the intersection of Burrard Street and West Georgia Street. 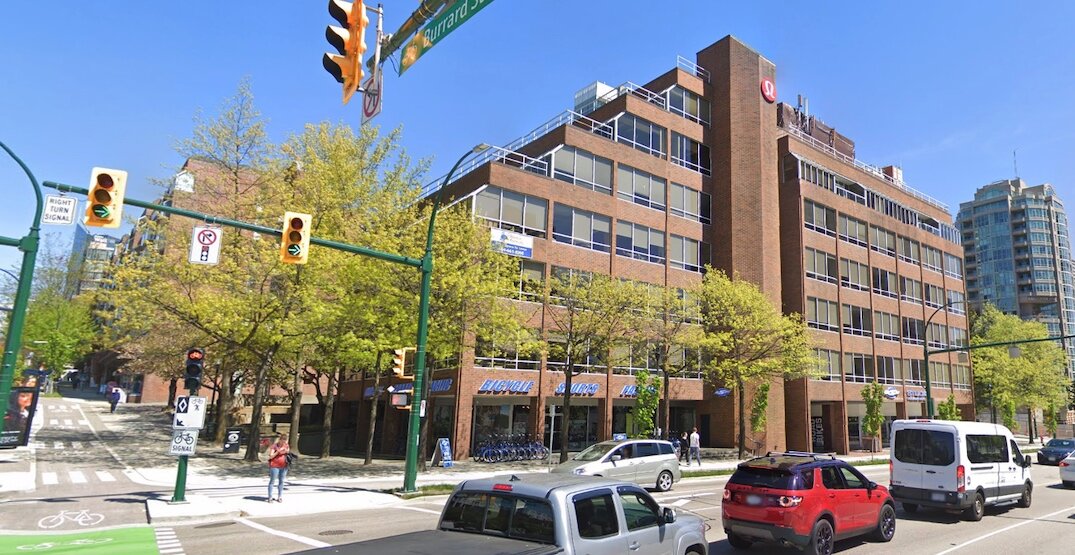 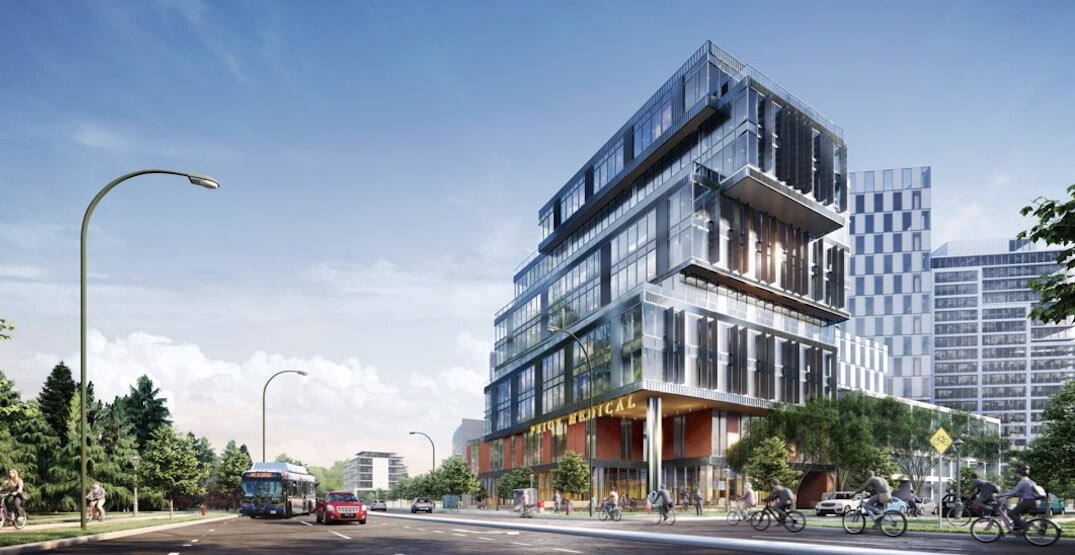 A new medical office tower is proposed for the False Creek Flats, in an area just outside of the formal footprint of Providence Healthcare’s site for the new St. Paul’s Hospital and Health Campus.

Keltic Development has listed 220 Prior Street — located at the southeast corner of the existing intersection of Prior Street and Station Street — as one of its properties for future development. 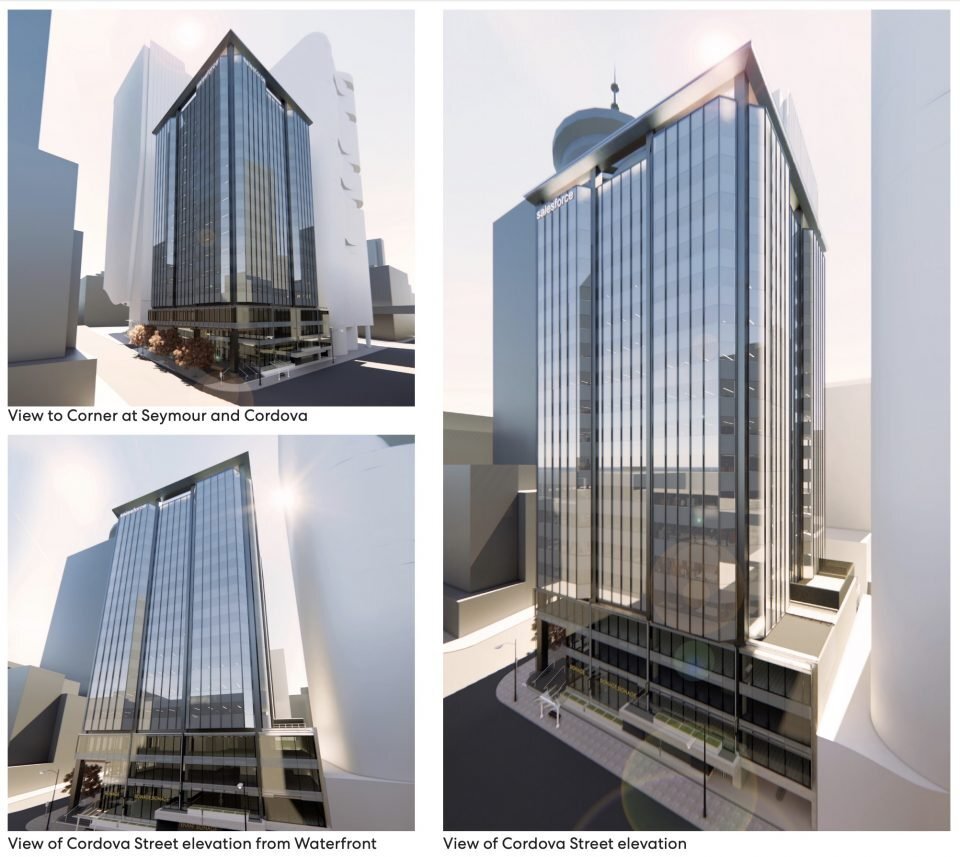 The office building at the corner of Seymour and West Cordova is about to get a makeover. The 17-storey tower at 333 Seymour will be reclad with a new curtain wall offering improved thermal resistance and an updated charcoal look. The reclad is being led by Perkins + Will Architects, in coordination with a revamp of the building’s podium, by B+H Architects. 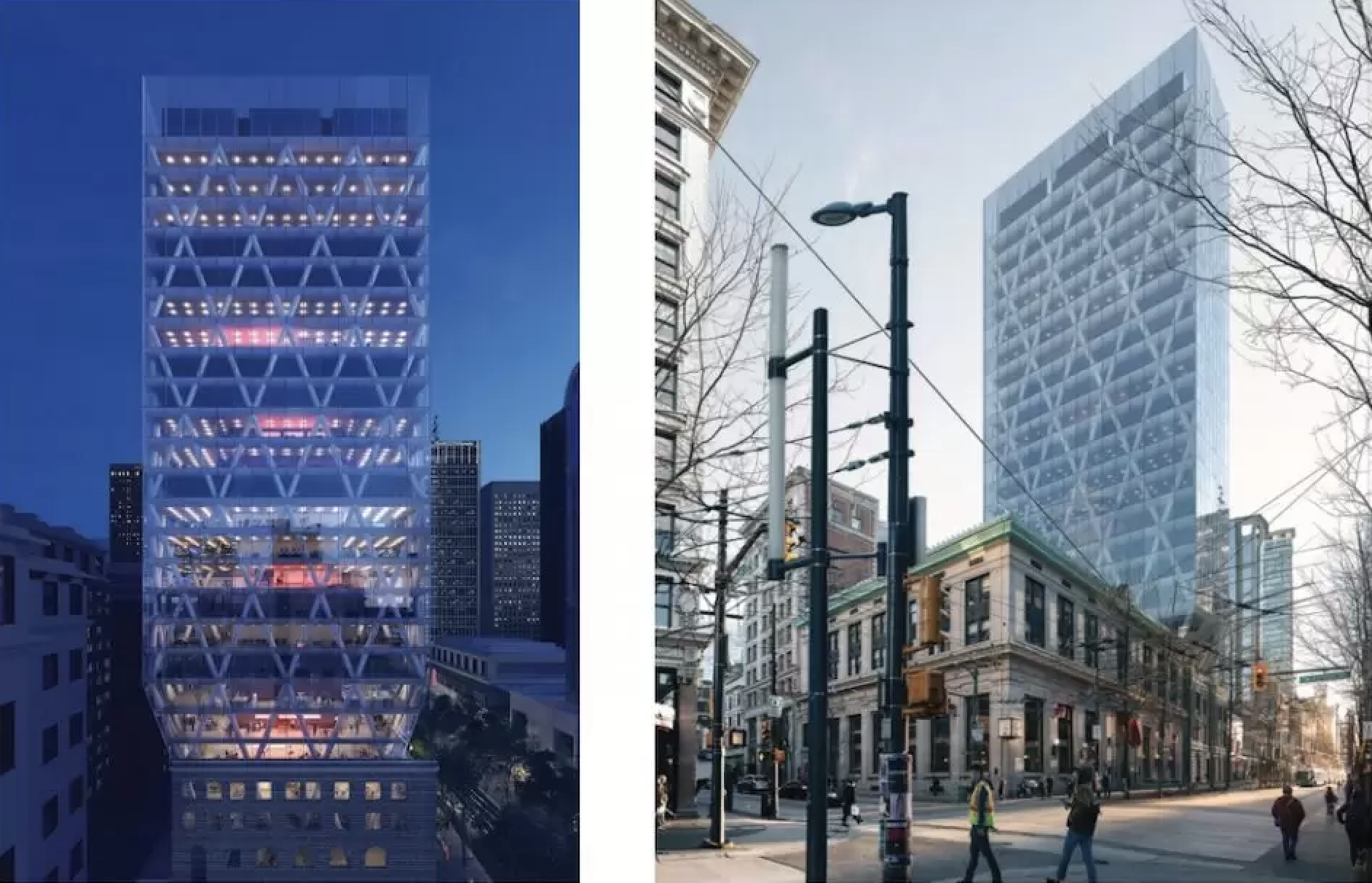 A 24-storey office tower is proposed atop a heritage building on Granville Street near West Pender Street. The existing building, known as the Leckie Block, dates back to 1899 and is considered an excellent example of the Romanesque revival style architecture. It currently houses a Moore’s men’s suit shop. The new office tower design features a structural diagrid that supports large flexible floor plates by locating the structural columns towards the exterior of the building. The glass for the sides of the office tower will be triple-glazed curtain wall. 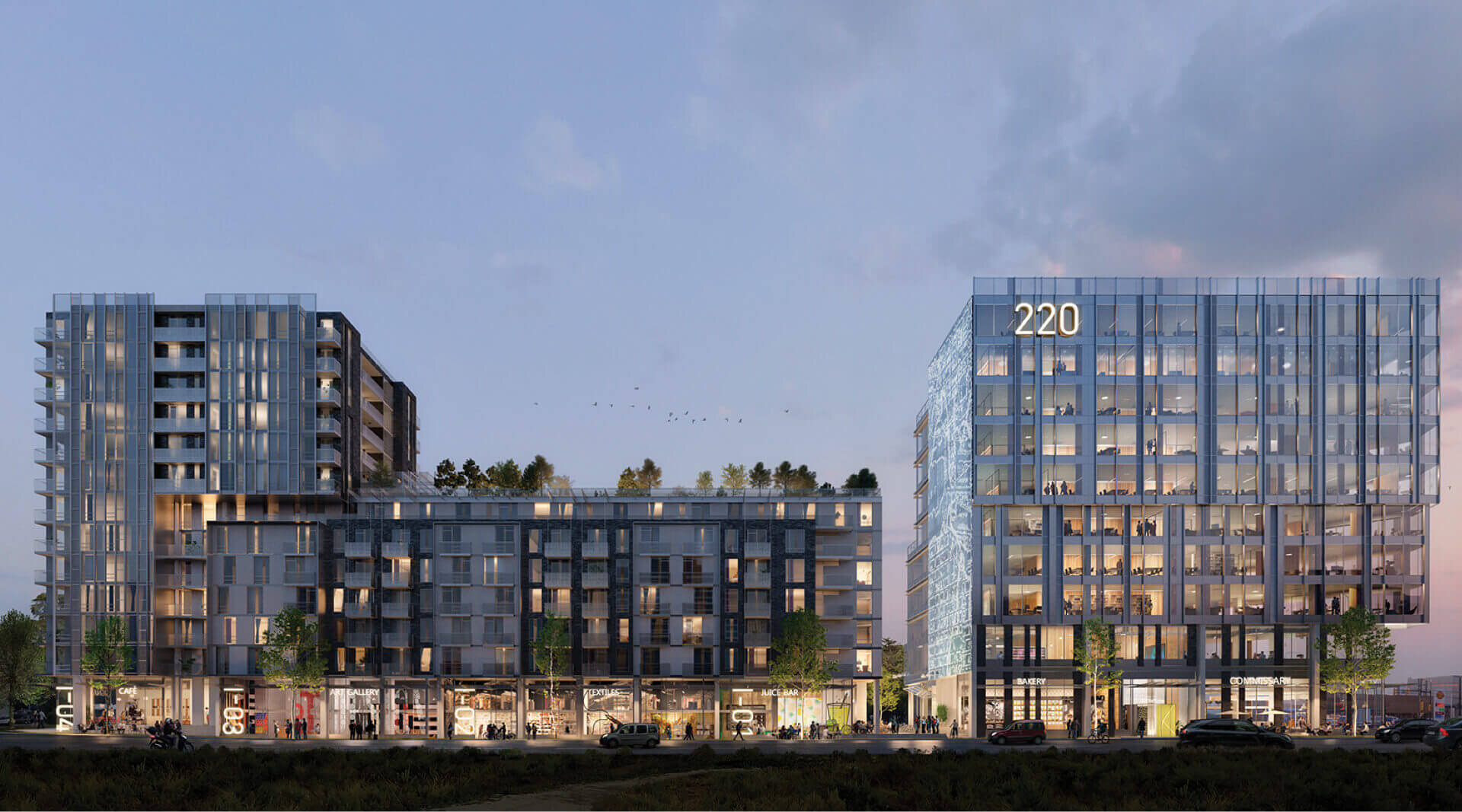 This dynamic mixed-use building is anchored on the east and west by two mid-rise towers bridged by an 8-storey residential building, and unified by creative industrial spaces that wrap around the entire development. With a bold approach and unique identity, Archetype is bringing a new model to Vancouver. The exceptionally designed offices feature best-in-class amenities, sophisticated common areas, a multi-purpose meeting room, and efficient, well-appointed floorplates.