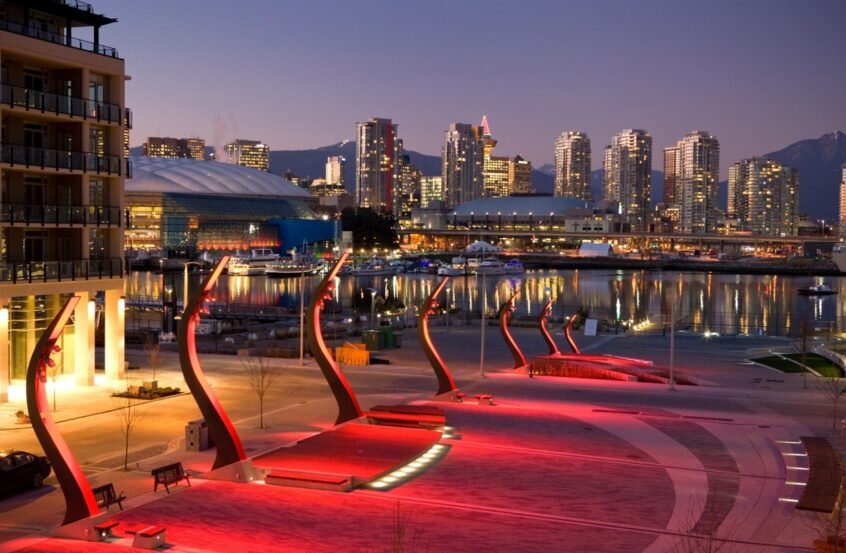 Olympic Village is Vancouver’s newest master-planned community that’s close to Downtown. The area is bordered by Cambie to the west, 2nd to the south, Main to the east, and False Creek to the north. Olympic Village is loved for its location. It’s on the water, just a short bridge across from Downtown and just a few blocks from Main Street. Being quite new, it offers a modern aesthetic that residents and buyers love. It’s also healthy and vibrant. There are athletic facilities within the development, while the Seawall and various water sports such as paddle-boarding and kayaking are mere steps away.

The real estate is all mid-rise condos and townhouses completed in 2010 or newer. Millennium developed the core of the Village, and other developers have built outward from there. Personally, I tend to prefer the Millennium product. In my opinion (and generally speaking) it tends to be higher-end with better quality design details. It was the Millennium product that housed the Olympians during the Winter Olympics in Vancouver, so it has a special bit of history attached.


What is the neighbourhood vibe?

The neighbourhood vibe is healthy, vibrant, young, active, clean, and new. Some might say it’s almost like a utopia.

The main downside might be that because the buildings are quite dense — and because they are not tall — views tend to be limited and rare. Also, many of the buildings are quite generic and lack interesting design details or finishings both inside and out. As mentioned previously, this opinion does not apply to the core of the Village. This is a generalization and does not apply to every single building.

The Olympic Village is largely built up at this point. However, there are a few more lots that I’m sure will be developed — including a huge waterfront piece of land that offers an amazing development opportunity. A portion of it is currently used as police vehicle parking but could be amazing if strategically developed. Also, the area above 2nd Avenue up to Broadway is undergoing major development with all sorts of cool new office and light industrial buildings. I personally think this is fantastic as these buildings make perfect homes for awesome businesses and modern companies — meaning a burst of innovative new jobs in the area.

In general, prices are similar to Yaletown prices. The exception might be older Yaletown buildings that have not been renovated. Olympic Village is sought after and there is no discount for being outside of Downtown. There are many buyers and residents who love Olympic Village the same — or more — than downtown.